Backtick: An Issue Tracker that Focuses on the Big Picture

Before you ask yourself why I’m working on yet another issue tracker, ask yourself how well the current crowd answers the perennial engineer question:

What should I do next?

For the best ones, the answer it sort of. Where all of them fail is answering a more imporant question. Behind the question of where to focus next lies a much more important one:

Why am I doing this in the first place?

How Issue Trackers Miss the Mark

In tech companies, it’s surpsisingly hard to set goals, communicate what they are, and measure against them. We believe an engineering team’s issue tracker holds a key lever for this problem. The goals and epics in existing issue trackers are lost, buried, if they are there at all. Most of the time, issue trackers look like an unsorted kitchen junk drawer that you’d rather not open.

What’s missing is a clear idea of where a team is going, so that everyone has a filter to sift the work that matters from the work that doesn’t. All tech startups are resource constrained you don’t have enough time, people, and money in the bank to do everything. The key is doing things in the right order, to the right depth, prioritizing ruthlessly. Think about it as a 2x2*: 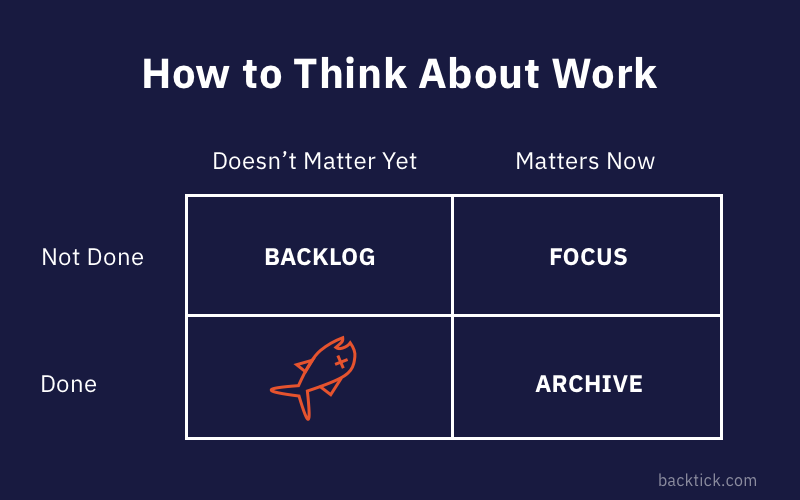 Focus: Top right you have the work that matters that hasn’t been done yet. This is the work an issue tracker should bring into sharp focus.

Backlog: Top left is the work that hasn’t been done and doesn’t matter yet. Yet is the important word in the sentence, the work may be important, but it doesn’t move the needle if you do it in the immediate future. This is the backlog. It should be out of your field of vision but at arms reach. And no, you should never, feel like you need to clear it (but do feel great when much of it becomes moot).

Archive: Bottom right is the work that matters that has been done, this is the archive. It’s useful to document things for posterity. This is why Backtick isn’t just an issue tracker, you can turn issues into documents so your wiki gets created as you do the work, not as a mandatory separate step.

Avoid: Bottom left is the quadrant to avoid. Doing work that doesn’t matter yet is the road to startup death. The way to avoid this quadrant is by having clear goals.

Goals clarify to everyone in a team, including the leadership, what matters now and what does not. Startup death is spending time, money, and effort doing the things that don’t matter yet.

Goals Matter, Now Back to the Issue Tracker

We set out to redesign the issue tracker along with its sibling, the wiki, and cousin, the roadmap. We believe the three belong together in a simple, single page interface that surfaces what you need in a blink and keeps the big picture, what really matters, in plain sight.

We’re currently building Backtick alongside a small group of seed and series A startups. If you are opinionated about tools and would like to influence our direction, we’d love to hear from you. Drop me a line.

* This 2x2 emerged in a conversation with Lela Djakovic, a talented emotional intelligence expert and wise observer of people, while we were comparing notes on how the best teams we’ve worked with get things done.

« How to Introduce a Group to Each Other, with Calibrated Color